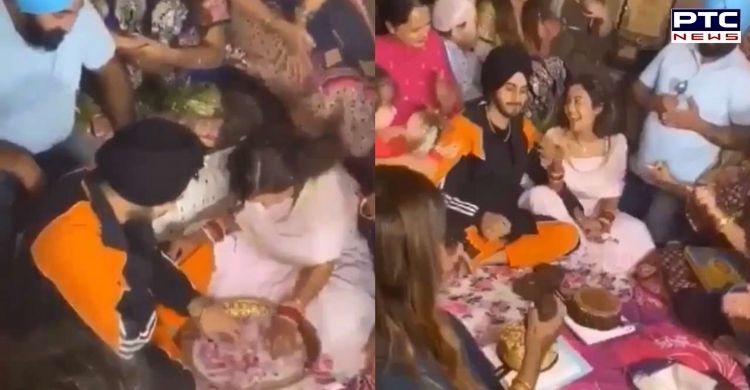 Neha Kakkar and Rohanpreet Singh Video: After her grand wedding in Delhi, Neha Kakkar is in Punjab, at her in-laws' place where the couple was warmly welcomed on the beats of dhol. It is for the first time that Neha has entered the house after her wedding.

A video of Neha Kakkar's entry with husband Rohanpreet Singh has gone viral where the couple was seen dancing to the beats of dhol.

After entering the house, Neha and Rohanpreet enjoying their time. Also, the couple was indulged in the game where they have to race against the other to find the ring soaked in milk and rose petals.

In another video of Neha and Rohanpreet Neha was seen cutely singing a song. Meanwhile, Rohanpreet Singh was not able to help himself and made some adorable gestures.

Neha Kakkar and Rohanpreet Singh Video post-wedding has garnered a lot of views and attraction from the audience.The images and videos from their haldi, mehendi, sangeet, engagement, wedding and reception ceremony have also been doing rounds on social media. The couple made their relationship official earlier this month - on October 9 even as they received a lot of love from fans all across.

Before their wedding, Neha and Rohanpreet also released a music video based on their wedding named Nehu Da Vyah, which was one of the hashtags for their real-life wedding.