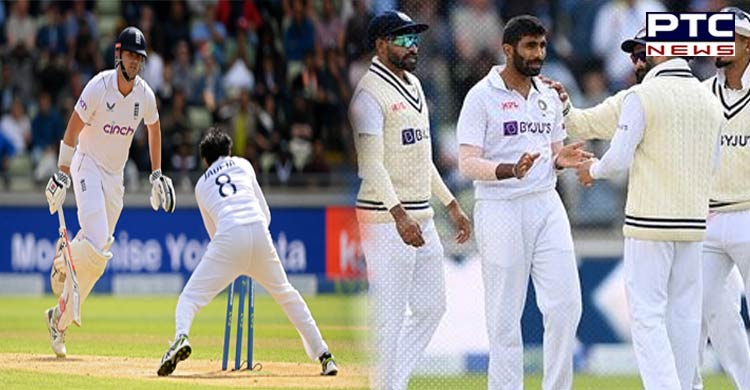 Edgbaston (UK), July 5: England made their most successful run chase ever in the longest format of the game with a seven-wicket win against India in the fifth and final Test of the series at Edgbaston in Birmingham, credited to a 269-run partnership between Joe Root and Jonny Bairstow.

England has now levelled the series at 2-2, denying India its first series victory on English soil since 2007. They also completed Edgbaston's most successful run chase.

India has also suffered their first Test defeat while defending a score of 350 or more runs.

The duo's strokeplay and dedication remained consistent on the last day, as they proceeded to hammer the Indian bowlers from the start. They finished their 200- and 250-run partnerships without breaking a sweat. Bairstow and Root continued their hot streaks with the bat, each earning their 12th and 28th Test tons. In the 78th over of the game, Root hit Jadeja for the winning single.

The previous three times England chased a target of over 250 in the fourth innings were against New Zealand in their 3-0 home Test series win last month (277, 299, 296).

The Indian bowlers toiled all morning without success, with Captain Jasprit Bumrah (2/74) the only Indian bowler to take a wicket in England's second innings. He finished the game with five wickets. In England's first innings, Mohammed Siraj had four wickets.