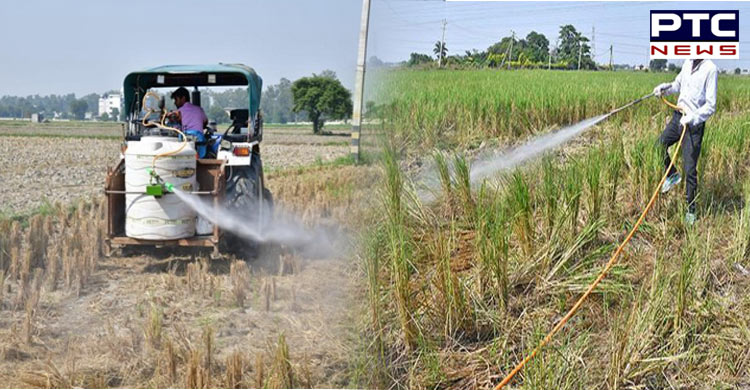 New Delhi, October 18: The Delhi Government has started spraying bio-decomposer on agricultural fields across the city to avoid stubble burning.

"The 15-point winter action plan includes tackling the issue of stubble burning, one of the biggest factors in the increase in pollution during winters in Delhi," said Development Minister Gopal Rai.

In response to the Delhi Government's initiative, Rai stated, "This year, we are taking action in a timely manner before the situation deteriorates. Today, we have gathered to start the campaign of spraying bio-decomposer prepared by the PUSA on the stubble. We sprayed bio-decomposer over more than 4,000 acres of agricultural land in rural parts of Delhi last year in collaboration with PUSA. This year, our aim is to cover 5,000 acres of agricultural land to avoid stubble burning."

So far, he said, 957 farmers have filled out the form to have their crops sprayed with bio decomposer for free.

"I have instructed the officers of the Agriculture Department to spray bio-decomposer on the fields of the farmers who have already filled the form at the earliest. We have created 21 department teams. They visited every village and farmers were requested to fill out the forms if they were willing to get the bio-decomposer sprayed on their farms. Spraying of bio-decomposer over farms across entire Delhi will begin today," he stated

Gopal Rai further added, "I am appealing to the farmers of Delhi that if they have not filled the form due to any reason, they can still fill the form."

He also stated that the government has decided to celebrate a Pollution-Free Diwali this year in light of the increase in pollution in Delhi during the festival.

"I have scheduled a high-level meeting with senior officials in the Delhi Secretariat tomorrow. In the meeting, we will prepare a Plan of Action to tighten the noose on pollution during Diwali. We are working on war footing to successfully run our campaign against pollution in the leadership of CM Arvind Kejriwal," he said.