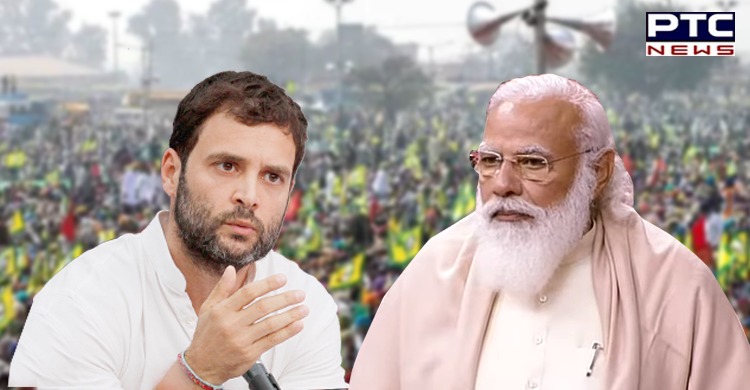 Farm laws repealed: Congratulating the farmers of the country, shortly after Prime Minister Narendra Modi in his address to the nation, on the occasion of Gurpurab 2021, announced the repeal of the three Central farm laws, Congress leader Rahul Gandhi on Friday said that farmers' 'Satyagraha' forced arrogance to bow its head.

The Congress leader tweeted in Hindi, "With their satyagraha, annadata of the country made arrogance bow its head. Congratulations on this victory against injustice."

The announcement of the repeal of the three farm laws comes ahead of the crucial Assembly elections in Punjab, Uttar Pradesh, Uttarakhand, Goa, and Manipur scheduled to be held early next year.

Among these states, farmers from Punjab and Uttar Pradesh were protesting across Delhi's borders for the past year. Farmers from Punjab, Haryana, and UP had arrived at the Delhi border on November 26, 2020, demanding the repeal of three farm laws -- The Farmers' Produce Trade and Commerce (Promotion and Facilitation) Act The Farmers (Empowerment and Protection) Agreement of Price Assurance and Farm Services Act The Essential Commodities (Amendment) Act.

Congratulations to everyone on the repeal of the 3 draconian farm laws. This is a big victory for our farmers, coming on the auspicious occasion of Sri Guru Nanak Dev Ji’s Prakash Purab. Farmers have won & arrogance has lost.

"We have decided to repeal all 3 farm laws, will begin the procedure at the Parliament session that begins this month. I urge farmers to return home to their families and let's start afresh," said PM Narendra Modi.

"Today I assure you that I'll now work even harder, so that your dreams, nation's dreams can be realised," he added.