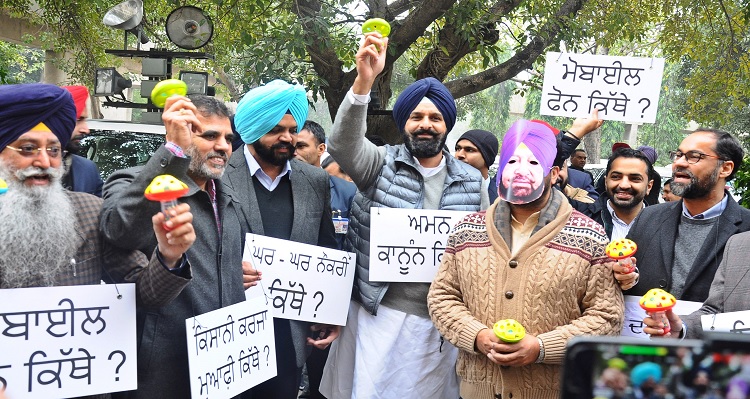 Chandigarh: The Shiromani Akali Dal (SAD) – Bharatiya Janata Party (BJP) legislature party members on Friday exposed the Congress government by ringing rattles in the Vidhan Sabha to wake it from its slumber and force it to implement the promises made to the people while staging a walk out in the Vidhan Sabha during the Governor’s Address.

The SAD-BJP legislature wing first staged a protest outside the Vidhan Sabha in solidarity with the people of Punjab, stating the Congress government had betrayed each and every section of society. Following this the legislators rose from their seats during the Governors Address to protest against the Congress government for making the Governor read falsities. Following this they staged a walk out from the House ringing rattles.

Talking to newsmen in the Vidhan Sabha premises, Legislature party leader Sharanjit Dhillon said even though this was the fourth Governor Address, none of the promises made to the people had been fulfilled by now. He said farm suicides were at an all time high in Punjab because the government had failed to implement the complete farm loan waiver.

He said similarly the government had reneged on all the promises made to the youth be it ‘ghar ghar naukari’, providing unemployment allowance of Rs 2,500 per month or mobile phones.Amidst slogans of Chaundha hai Punjab Captain ton jawab, Mr Sharanjit Dhillon said the government had also betrayed the scheduled caste and under privileged sections of society.

He said SC students had been prevented from studies by stopping their scholarships. He said similarly even the 200 units free power facility given to Dalit consumers by S Parkash Singh Badal had been discontinued on pretext of excess load and they had been saddled with huge bills. “Shagun scheme promise of Rs 51,000 has remained a pipe dream. So has the promise of giving sugar and tea leaves along with aata-daal scheme. Even schemes like old age pension is also not being implemented properly”, he added.

Stating that the session was a mere formality with the Congress government refusing to discuss the burning issues of Punjab, Mr Dhillon said even Governor V P Singh Badnore had skipped many paragraphs from the Governor’s Address because he too was deeply distressed at the manner in which people were suffering in Punjab.

He said even as the people were suffering and State employees were not being given Dearness Allowance arrears of Rs 5,000 crore the Congress government was splurging crores on an army of Advisors who had been appointed in contravention to the constitution. He also condemned the government for not releasing the Sixth Pay Commission report and not regularizing the services of 27,000 contractual employees.