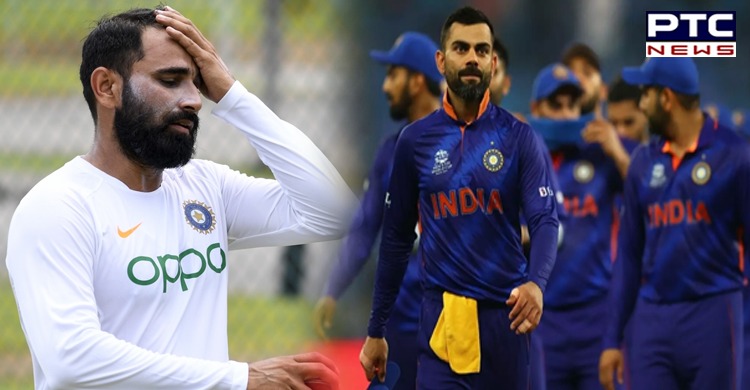 India vs Pakistan: Indian pacer Mohammed Shami is being subjected to online abuse after the Men in Blue suffered a defeat against arch-rival Pakistan in the ICC Men's T20 World Cup 2021.

After India was defeated by Pakistan on Sunday, fans took to Instagram and Twitter to pass derogatory statements on Mohammed Shami.

Pakistan defeated India by ten wickets while none of the India bowlers was able to leave an impact as Babar Azam and Mohammad Rizwan took the bowling to the cleaners.

Indian skipper Virat Kohli also saw some unruly fan behavior and the trolls have also not been kind to him, as he is also being criticised for his captaincy during the game.

Mohammad Rizwan and skipper Babar Azam put on a remarkable show on Sunday as Pakistan thrashed India by 10 wickets at the Dubai International Cricket Stadium.

Rizwan (79*) and Babar (68*) didn't give any chance to India bowlers to come on top as the two batsmen dominated the proceedings. Pakistan chased down the target of 152 without losing a wicket as India looked clueless in their opening match.

"We didn't execute properly. Credit where it's due and Pakistan outplayed us today. They started brilliantly with the ball, and 3 wickets for 20 runs was not a good start. We needed wickets early but with the bat, they gave us absolutely no chances," Kohli said.