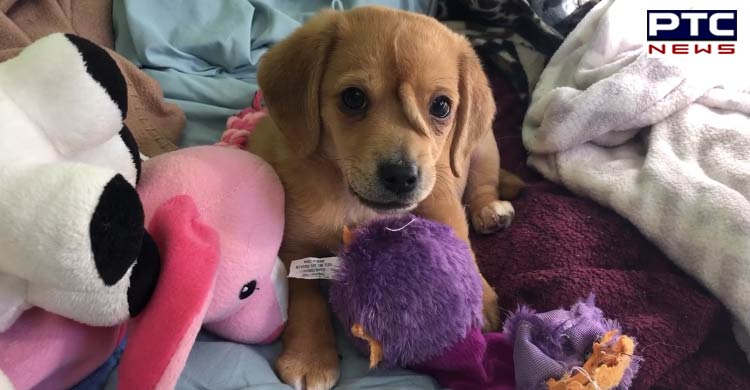 A rescue puppy caught the fancy of millions of hearts around the world because of an endearing deformity. The 10-week-old pup has a tail on his head between the eyes, making him look like a unicorn. The short tail flops from side to side when he plays. It has a normal tail at the rear end as well.

The unusual pup was discovered with frostbite on one of its paws, after which he was sent to Mac's mission in Jackson, Missouri, specialists in caring for animals in need. They named the puppy, Narwhal, a little magical, furry unicorn.

The video of the puppy is going viral on social media and people across the world are volunteering to adopt him. Mac said in a post, “We are not accepting applications for him right now until we are very certain his unicorn horn is not going to have a growth spurt and become an issue. No, it does not wag. Yes, he is keeping it, he is amazingly awesome!!"

A user said, "That little cutie has gone viral I think! He’s been on the news up here in STL and on so many pages on Facebook! He’s adorable and I hope he finds the perfect home when the time is right."

Another user said, "He is so cute! I do wonder if as he grows, the tail will get longer and affect his eye sight. But it may not and he will be just fine! Thanks for being responsible and making sure he is ok!"