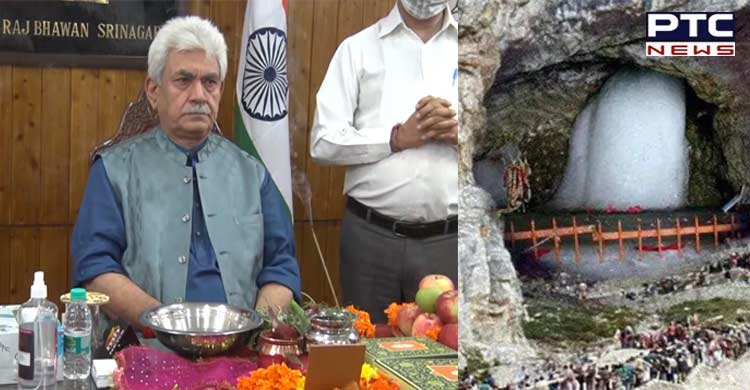 The J-K Lieutenant Governor prayed for peace, progress and prosperity of the people amid chanting of religious hymns and mantras.

"I truly admire and appreciate the selfless contribution of all stakeholders and citizens for making this difficult Yatra hassle-free for pilgrims," he said while offering prayers at Raj Bhawan.

The Amarnath Yatra began on June 29 amid tight security arrangements made by the Central Reserve Police Force (CRPF) in collaboration with the army and the local police.

The Amarnath Yatra was partially suspended following a cloudburst incident, and the pilgrims were instructed to stop at the Baltal Base Camp. On July 11, it started up again from the Nunwan Pahalgam side.

At least 15 people died as a result of a flash flood but no individual has been reported missing, according to last month's report from Minister of State for Home (MoS) Nityanand Rai.

In reply to an inquiry from BJP MP Neeraj Shekhar regarding the number of pilgrims who died during the Amarnath Yatra in July 2022 as a result of flash floods, MoS Rai stated, "As per information provided by Jammu and Kashmir government, 15 persons lost their lives due to flash flood, but no person has been reported missing."

The pilgrimage to the Amarnath shrine, a 3,880-meter-high cave shrine dedicated to Lord Shiva in the upper Himalayas, is undertaken from the twin routes of Pahalgam and Baltal.