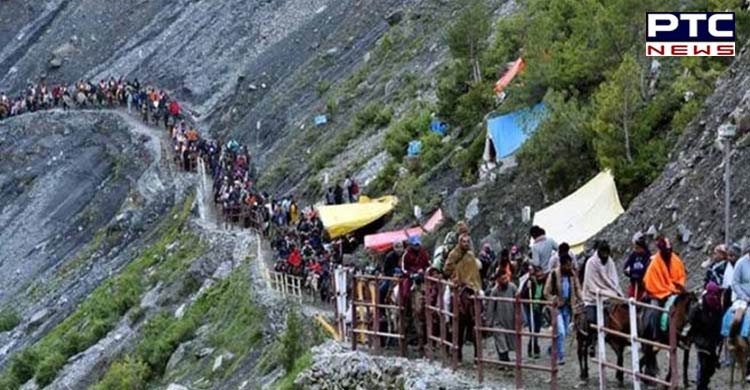 Baltal (Jammu and Kashmir), July 14: Amarnath Yatra has been paused from the Nunwan-Pahalgam base camp due to heavy rainfall in the area, the authorities reported on Thursday morning. Meanwhile, yatra from the Dhumail side has been ongoing with 5982 pilgrims left to visit the holy cave.

"Amarnath Yatra has been paused from the Nunwan Pahalgam base camp early today due to heavy rainfall in the area. Meanwhile, yatra from the Dhumail side has been ongoing with 5982 pilgrims left to visit the holy cave," a government official stated.

Amarnath Yatra partially resumed on Monday from the Panjtarni side after a two-day halt due to the cloudburst incident that claimed the lives of 16 people.

The Yatra was halted after the cloudburst incident on Friday. Sixteen people were killed and at least three dozen were missing after a cloudburst triggered flash floods near the cave shrine of Amarnath.

Following a cloudburst that hit the region surrounding the famous Amarnath shrine on Friday, the Indian Army installed radars on Sunday in an effort to find survivors beneath the rubble.

On Sunday, Manoj Sinha, the lieutenant governor (LG) of Jammu and Kashmir, met with pilgrims while visiting a base camp in Pahalgam.

On June 29, the Yatra set out from Jammu under the strict security measures put in place by the Central Reserve Police Force (CRPF), the army, and the local police.

The pilgrimage to the Amarnath shrine, a 3,880-meter-high cave temple dedicated to Lord Shiva in the higher Himalayas, is conducted from the twin routes of Pahalgam and Baltal.