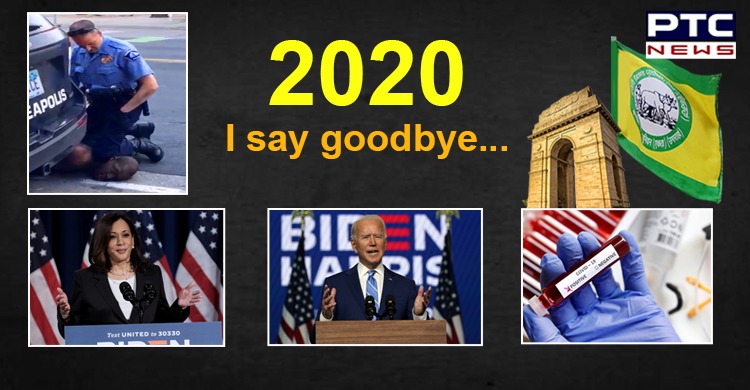 It is time for me to say goodbye. I was a year like no other. Many would love to forget me fast while some others may remember me for the strong messages I delivered.

“Do not play with mother nature,” was my first message that shell shocked the humanity. A minute, invisible speck, of the size of a protein, had the might of the world scurrying for cover, enforcing unprecedented universal curfew thus inflicting huge financial losses everywhere.

A global pandemic shook humanity to its bones as the might of the science that made the man “undisputed king” came down on its knees to counter it.

It was me that brought you all face to face with nearly extinct flora and fauna that mankind had confined to history books. Some guests from the wild strolled on streets while habitation got a feel of clear and pure air and water. I made oil, a symbol of supremacy between superpowers, irrelevant and had the mighty hawks of the sky, both the military and the civilian aircraft, grounded.

Though initially reluctant, I made Donald Trump bow out of the most powerful office on the earth and saw power changing hands elsewhere as well.

With a very heavy heart I had to force a postponement, for the first time ever, of summer Olympic Games besides cancelation of England’s prestigious Wimbledon.

Indian farmers in general and Punjab farmers, in particular, will never forget me. Feeling of oneness, camaraderie, and fighting the might of the State with the support of all sections of society, both peacefully and democratically, not only hawked headlines but also earned the world’s admiration.

Elsewhere there were bitter political divisions and racial unrest.

I would also be remembered for the “Black Lives Matter” agitation that shook the world. George Floyd’s death sparked global protests. On May 25, he was arrested by police in Minneapolis for allegedly using a counterfeit bill. Video footage showed one of the officers kneeling on Floyd’s neck as he was pinned on the ground. His repeated pleas that he could not breathe went unattended. In the weeks that followed, “Black Lives Matter” movement fueled mass protests against systemic racism and police violence in more than 2,000 U.S. cities and 60 countries around the globe.

In one of the most powerful democracies, I witnessed Joe Biden and Kamala Harris winning a historic election thus preventing Donald Trump from winning the second term in office. Vice President Joe Biden clinched the Democratic nomination and chose Senator Kamala Harris as his running mate, making her the first African American, first Asian American and third female vice presidential candidate in U.S. history. Ultimately, she became the first woman to become Vice-President of the US.

Besides the US Presidential election, New Zealand also went for its general elections. Ardern Jacinda won her second term in office as Prime Minister of New Zealand and she inducted Priyanca Radhakrishnan of Indian origin as a member of her council of ministers. Dr Gaurav Sharma became other Indian to enter the Parliament of New Zealand.

In Canada, three provinces also witnessed early polls, and everywhere the ruling parties stormed back into power with a better mandate.

New Brunswick also called an early election to give PC a clear majority mandate. Canada also achieved a milestone in electing its 100th Member of House of Commons in the by-elections held on October 26. One of the two seats fell vacant after the resignation of the Finance Minister Bill Morneau.

In India, some States had their elections and these included Bihar where the BJP emerged as the single largest party. It still asked its alliance partner leader Nitish Kumar to head the government.

I know it is time for you all to sing “Auld Lang Syne,” the Scottish folk song that many sing at the stroke of midnight on New Year’s Eve It means “days gone by” It was Robert Burns who transcribed, adapted it after partially rewriting it in the late 18th century. Its lyrics, which rhetorically ask whether “auld acquaintance” should “be forgot,” have been interpreted as a call to remember friends and experiences from the past. Bye-bye.