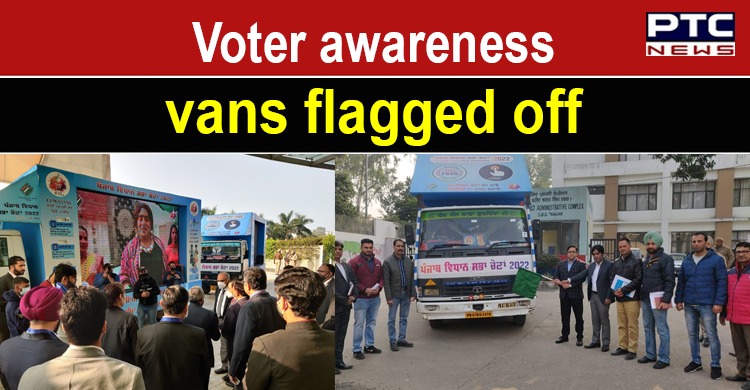 A total of 30 mobile vans equipped with LED and audio systems will roam across Punjab to create voter education and awareness on various aspects, including registration, ethical voting, and EVM-VVPAT. Bigger districts will get two vans each, while one each van will be handed over to smaller districts to create awareness ahead of the Punjab Assembly elections 2022.

The commission team then interacted with different types of voters, including first-time voters, persons with disability (PwD) voters and transgenders, present on the occasion. They were also felicitated.

State PWD icon Dr Kiran, who is visually impaired and serving as an Assistant Professor at Punjabi University, Patiala, and three district PwD icons, including  Jagdeep Singh, president of the Patiala Association of Deaf, Inderjeet Nandan and Jagwinder Singh, a cyclist, and employee at Soil Conservation Department, and two Transgender voters — Mohini Mahant and Aaina Mahant, both district icons, were also felicitated.

The commission also launched an online poster design contest to engage youths and get new creative ideas about the values of every single vote. The top three posters would be given cash prizes of Rs 10,000, Rs 7,500 and Rs 5,000, respectively, and 10 consolation prizes of Rs 2,000 would be given. The contest will happen across social media platforms — Facebook, Twitter, and Instagram.