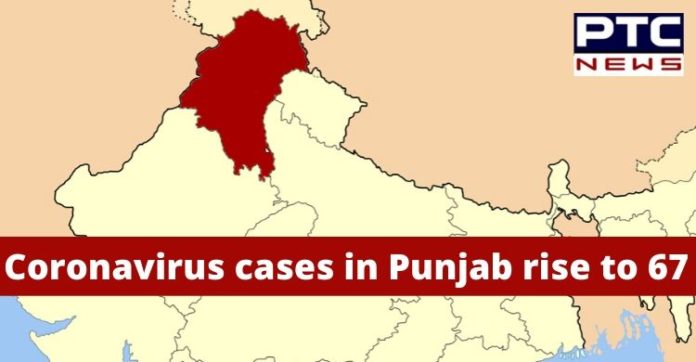 The total number of confirmed coronavirus cases in Punjab has increased to 67 after fresh cases were reported from Derabassi and Ludhiana. According to the information, a 42-year-old man, a resident of Jawaharpur village in Derabassi Tehsil of Mohali district tested positive for coronavirus on Saturday.

In Ludhiana, a 26-year-old, a resident of Rajgarh in Payal, has tested positive for coronavirus. Reportedly, he is being suspected of attending the religious congregation at Nizamuddin in Delhi. However, the officials are currently investigating if he has attended the Tablighi Jamaat or not.

Also, three cases were reported from Amritsar and one each from Jalandhar, Faridkot and Pathankot, on Saturday. A 35-year-old man tested positive in Harindra Nagar, Faridkot. On Friday, three people, one man and two women, tested positive in Mansa who had attended a religious congregation at Nizamuddin in Delhi. Likewise, two have been reported from Mohali, who had also attended a religious congregation at Nizamuddin. Meanwhile, 3 people, who came in contact with Bhai Nirmal Singh Khalsa, tested positive for coronavirus in Amritsar.

Likewise, Ropar has reported its first positive case from a village in Morinda. After Bhai Nirmal Singh Khalsa’s death, the Punjab Government released a list of 31 people who came in touch with him. Likewise, a 69-year-old female tested positive in Shimlapuri in Ludhiana on Thursday. Responding immediately, the Shimlapuri area was sealed in an order to prevent the spread of coronavirus.