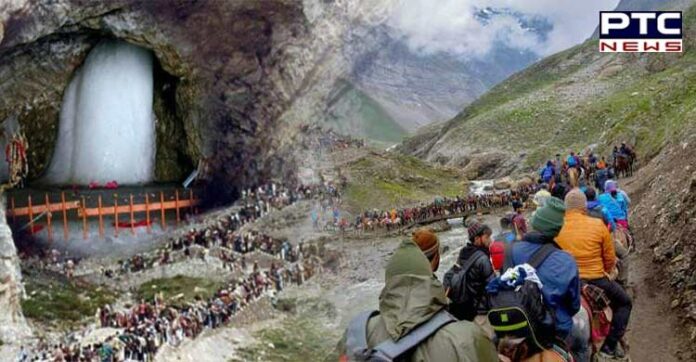 Srinagar, June 14: The Jammu and Kashmir government on Monday released a notification for pilgrims of the Amarnath Yatra and stated that the devotees need to furnish Aadhaar authentication on a voluntary basis.

"The pilgrims desirous of undertaking Amarnath Yatra shall furnish proof of possession of Aadhaar or undergo Aadhaar authentication on a voluntary basis," read an official statement. Earlier, Lieutenant Governor of Jammu and Kashmir Manoj Sinha on Thursday reviewed the preparations for the annual pilgrimage of Amarnath Yatra.

According to an official statement, "All the work is to be completed within the set timeline and officials to ensure optimum use of technology to make the yatra safer and more convenient for the pilgrims."

Notably, this year, the pilgrims can also avail of helicopter service directly from Srinagar for the yatra.

About three lakh pilgrims are likely to take part in the pilgrimage to the cave shrine located in the upper reaches of south Kashmir.

While online registration has already begun, the pilgrimage is scheduled to be held for 43 days between June 30 and August 11.

The Amarnath shrine pilgrimage to the 3,880-metre-high cave shrine of Lord Shiva, located in the upper reaches of the Himalayas.