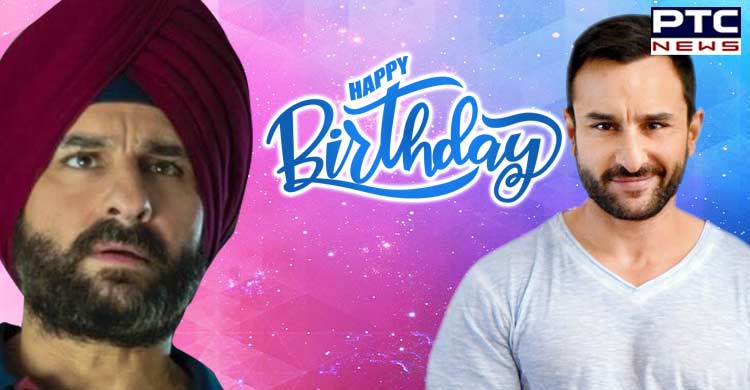 Saif Ali Khan Birthday: Sacred Games Season 2 Actor Sartaj Singh is celebrating his 49th birthday, as he was born on 16 August 1970. He is an Indian Film Actor and Producer. Saif Ali Khan was born to actress Sharmila Tagore and cricketer Mansoor Ali Khan Pataudi. He made his acting debut in 1993 with Yash Chopra's unsuccessful drama Parampara, but Saif Ali Khan made his existence in the Indian Film Industry with his roles in romantic drama Yeh Dillagi and the action drama Khiladi Tu Anari (both in 1994).

Saif Ali Khan earned more success with the commercial family film Hum Saath-Saath Hain (1999). Then on, he got some of the prominent roles in the films including Dil Chahta Hai (2001) and Kal Ho Naa Ho (2003). The romantic comedy film Hum Tum was proved to be his first successful film in which he was in the sole male lead, for which he earned the National Film Award for Best Actor. Later, the film like Salaam Namaste established him as the leading actor of the Indian Film Industry.

Also Read: Sonu Nigam: 7 Songs of the melodious voice, which will leave you mesmerized

Later, in 2008, his commercial films like Race and Race 2, Love Aaj Kal, Cocktail, were the successful films of him at the box-office. But, the film which gave him the extreme popularity was the Netflix series Sacred Games, in which he has played the character of Sartaj Singh. Meanwhile, Netflix series Sacred Games season 2 is streaming online and hence, Saif Ali Khan is praised a lot for his acting in the second season as well.